The first few weeks after a release, it is important to try to track the movements of the pangolin every day while it settles and searches for its own home territory. Overnight it can suddenly roam many km's and easily be lost by the tracker. During July and August 2012 Otto's locations were therefore regularly ascertained by Graham and Tim using a Yagi receiver. In the first week Otto covered about 12km in a round-about way. Over the first 1-2 weeks Otto was found above ground during the day, perhaps as it was still hungry (though its prey species may not be so active during the daytime) or again for rehydrating. Later, it slept in a den during the day, only emerging at night. Otto sometimes used the same den for several days in succession, and on about 3 occasions surprisingly did not emerge every night to forage - a worrying period for the researchers fearing the animal's demise in its den.

Otto slowly became less stressed by human presence. On first release, he 'shot off like a rocket'.  In the second week he settled down a bit and became less stressed when he knew trackers were close. Whereas he would try to hide in the beginning, he now stood still to hear what was happening and only when he saw humans would he curl up. Until an animal has calmed down enough without feeling threatened when trackers/researchers are nearby, there is little chance for observational studies. If the animal holes up during the day this will take even longer. A long-distance tracking solution therefore like the GSM + GPS 'combos' which we have been testing, provided there is GSM coverage (patchy in Mundulea), or very expensive satellite tracking devices would avoid the disturbance from trackers nearby on foot using a Yagi until the released pangolin settles onto a new home territory.

A new larger 5-element Yagi aerial was purchased for the Rf work. Though less portable than the usual 3-element antenna for carrying through thorn bush, it gives a somewhat increased detection range and directionality for initial fixes. As usual the rocky thorny ground of Mundulea took its toll on tyres - averaging 1 puncture/day, sometimes more even with patient driving. 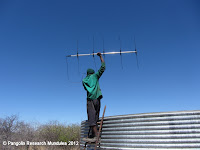 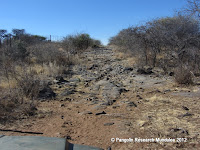 The map below contrasts RF telemetry location fixes for Otto on different days during the initial  two weeks of roaming after his release in August 2012 (blue flags) against daily location fixes obtained during about two weeks in October (red flags) showing clearly that he had then settled down to a home territory.

The difference in the range covered by Otto on successive foraging nights during these two periods is more apparent below, adding lines joining successive locations where he was found: blue lines cover about 65km, red lines about 12km. Note that some of the initial distances covered by Otto in one night were longer than the detection range of our RF telemetry equipment. 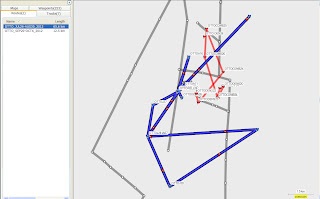 Of course, with Mundulea's large seasonal and annual variations in rainfall, thus in vegetation growth and so in prey species availability, plus the possibility always of bushfires, we have no guarantee that Otto will not relocate temporarily for a period or even permanently.