Bruno Nebe talks about pangolins and our project in this YouTube video interview He addressed the theme 'Is Conservation for Sale?' in a TEDx talk on Mar 27th 2015 which can be watched via this YouTube link.

Pangolins, sometimes called scaly anteaters, are very unusual animals. These toothless mammals are covered with hard overlapping scales, walk on their hind legs counterbalanced by a large tail and feed exclusively on ants and termites. The prey are dug out with their sharp claws and caught on a very long sticky tongue. (Watch this National Geographic video) The young are carried on the mother's back. Usually nocturnal, they sleep most of the day in burrows made in the ground, or take up residence in the dens of other animals such as the aardvark. When threatened, pangolins curl into a armoured ball, protected by their sharp scales. (see http://en.wikipedia.org/wiki/Pangolin ) 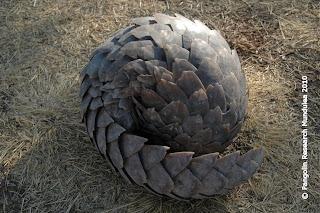 (Click on any photo to see an enlarged version)
Eight different pangolin species can be found across Asia and sub-Saharan . Poaching for the illegal wildlife trade or for Chinese medicine products and their habitat loss have sadly made these creatures one of the most endangered groups of mammals in the world. In June 2010, nearly 8 tonnes of more than 2000 frozen pangolin and 2 tonnes of their scales were seized by Chinese customs officials from a boat destined for mainland China, see article in The Guardian)
(For more background on this terrible trade, see http://www.savepangolins.org/conservation and support the Save Pangolins organization on Facebook)

Being nocturnal and highly secretive, these elusive solitary mammals are thus difficult for scientists to study in the wild. Attempts to keep them in captivity invariably fail, because of their prodigious appetite for enormous numbers of live ants and termites - and their abilities as escape artists! Estimates of 70 million insects consumed per year have been made (see Bush Warriors, 19th Nov. 2010) Many mysteries therefore remain about their behaviour and habits: our ignorance hampers conservation efforts. For example, there are no detailed studies on the population levels, ecology, or life history of the Sunda pangolin, Manis javanica. Meanwhile, little is known about the current distribution and range of the various other pangolin species.
Our own focus in Namibia is on the Pangolin, or Temminck's ground pangolin (Taxon Manis temminckii, Smuts 1832, of the Manidae family, Pholidota order): see this excellent video plus species summary or watch this BBC video. The pangolin is less threatened than the four Asian pangolin species but remains rare with decreasing numbers, because of its value in the Chinese and Traditional Medicine illegal markets, chemical insecticides and electric fences. (Its entry in the CITES RedList 2000 by the Pangolin Specialist Group allocated it the rating Lower Risk - near threatened (LR/nt - ))

Manis temminckii is one of the least studied types of pangolin, despite its widespread occurrence throughout southern and eastern Africa. For example, there are no detailed studies on the population levels in dry savannah ecologies or of the life histories of the Temminck's ground pangolin - i.e. its traits remain undocumented and basic ecology remains to be researched. One of the few people working on this species is Jonathan Swart, based in the Sabi Sand Wildtuin next to the Kruger Park, South Africa, see the Kruger Times article.

Pangolins are ancient creatures. Their ancestors are thought to have been members of the suborder Palaeanodonta, which diverged from the ancestral edentates some 60 million years ago, see the linked article. These small, armorless animals rapidly became extinct but their successors evolved into the order Pholidota. Today, this order contains one family, the Manidae, with eight living species. Four species are found in Africa and three in Southeast Asia. The widely accepted classification of the seven living pangolin species recognizes one genus (Manis) and five subgenera (Manis, Paramanis, Phataginus, Smutsia and Uromanis). The earliest fossils of the Cape Pangolin species itself date back 40 million years, see pages 112 & 113 in: The Complete book of Southern African Mammals, compiled by M. G. L. Mills & Lex Hes, Struik Publishers, Cape Town, 1997.
Posted by Bruno and Paul at 15:56