During his Sept-Oct 2012 field work, Paul with Tim's assistance was able to find Otto, twice attach one of the prototype GPS+GSM 'combo' tracking devices with freshly-charged batteries,  re-release the animal where it was found and subsequently remove the combo to download its GPS data log for detailed analysis and leave the animal unencumbered.

See the video of Otto uncurling and walking off after release and another video of Otto investigating its surroundings taken by Paul Rankin.

Although becoming less stressed by human presence than after his rescue, Otto has always been a very strong and 'fiesty' animal. The electronics we use to try to track and learn more about his behaviour therefore takes quite a harsh battering. The photos below show the typical damage from flexing the RF transmitter aerial's roots and one occasion when Otto managed to shear off the top bolts on the GPS tracking box, spilling all the electronics out while he had to be kept for a few hours after early morning capture in a workshop prior to release later that morning. Luckily the GPS unit's electronics still worked and all the GPS data log was recovered! In view of the size and weight (about 100g) of this version of the combo prototype, then Otto at 8kg is about the smallest pangolin suitable for carrying this device. 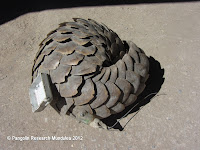 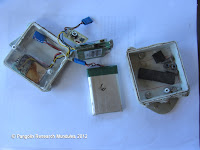 Multiple daily activation periods were programmed for the combo's GPS and GSM units. The GPS logging was set up to record location every two minutes during the whole night period when the animal was likely to be foraging, while four 15-min windows for activating the GSM unit, again when the animal was likely to be above ground and so in cellular coverage were set up. Conserving battery life by minimizing operation time in this way gives a battery life of about 12 days with this version of the combo. Fruitlessly searching to try acquire GPS satellites, and especially make a cellular network connection, while the animal is underground is wasteful on battery charge.

Paul set his personal alarm to wake up for the GSM 'on' windows to attempt to call the combo's GSM unit and so receive the pangolin's current location via an SMS from the combo. About 1 in 3 of these windows proved successful - the MTC cellular coverage in Mundulea is patchy, while even if the animal is above ground, cell reception from a unit on the animal's back close to the ground may easily be obscured by a rock or the terrain. Once recent coordinates for Otto had been obtained via an SMS, a starting point for finding the animal at night could be set as destination on a handheld Garmin GPS unit and walked to through the bush, so making the final locating of the pangolin with an RF Yagi receiver incomparably easier. 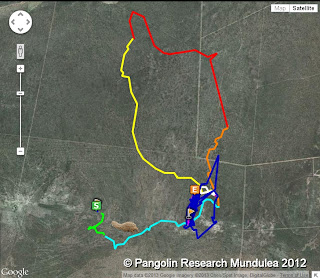 The amalgamated track of Ottos movements from the uploaded GPS data of two combo runs, Sept 22-30th and Sept 30th-Oct 8th can be seen by loading this animated view of the image above. Select the left hand 'Map View' of the three circular icons to start the animation and wait a few momentsfor it to commence. The animation can be speeded up or slowed down by the playback controls. Otto's track covered about 31km in about 16 days.

Such detailed GPS tracks logged every 2 minutes would allow us to correlate the pangolin's foraging movements and preferences with the local environment, prey species samples etc., determine the nocturnal activity periods (possibly dependent on lunar phase or temperature) and do a detailed breakdown of foraging behaviour, e.g. typical dwell times at eating sites.