The last two weeks of Paul's field work at Mundulea, Oct-Nov 2011 was spent searching for the pangolin Okulunu once more, sometimes accompanied by Emiel or Tim. The aim was to attach temporarily, in addition to the RF tag, a prototype tracking device which combines GPS data logging with GSM remote communication via SMS messages, see previous post.

Picking up the signal from Okulunu's RF tag and finding the pangolin again proved to require a lot of patience and field work, see the challenges mentioned before. The local area and the dirt road passing near the burrow where it had previously been found in asleep was scanned systematically on foot and from a vehicle roof every few hundred metres in the day using the Yagi antenna. To improve the detection range, nearby windmill towers  and hills in the S of Mundulea were climbed in the daytime. At night, when the RF range should be longer - if the pangolin were above ground foraging on that night - its signals were searched for on a larger-scale grid of a few km's encompassing its last known location, driving along the accessible dirt roads around the Mundulea Reserve in case its (unknown) home range was extensive compared with the RF system's range, but all to no avail.

The nearest high point from Okulunu's last position is an W-E ridge, about 130m above and 3 km away. The highest location in Mundulea is 'Bee Sting' mountain on the Western boundary of Mundulea, which is on the same bearing as the ridge from Okulunu's last known den and is elevated ~290m above and 10km away. The mountain is hard to climb through thorn and up loose rock, and even trickier to descend safely in the dark. A climb in daytime was made without getting any signals from the top. The W-E ridge was climbed, walking its length several times in daylight and also at night, again without success. The rough drive to this ridge is via a known rhino habitat and through vicious thornbush - not so easy with an open-sided vehicle without lights and only a hand-held spot! Once an electric storm before torrential rain caused the search to be abandoned, because holding a Yagi aerial up on top of a hill with lightning flashing all around is not to be recommended!

Finally, Bee Sting mountain was climbed to mount vigils there, from the spectacular Namibian sunsets through dusk and into the cold night under a beautiful full moon, checking for signals from Okulunu's tag every half hour. On the first vigil, Nov. 2nd strong signals were eventually picked up at about 9:30pm, on a NNE bearing, towards Okulunu's last known den. The signals seemed so strong that they seemed to emanate from betyween the mountain and the W-E ridge. Tim and Paul scrambled down, checking for signals on the way. Sometimes the signals disappeared for many seconds, probably while the pangolin out foraging was behind a rock, emphasizing the need to try more than one cursory scan with the Yagi antenna. Unfortunately, about half way down Bee Sting mountain the signals disappeared altogether. Further attempts to get signals from ground level to pursue the hunt also failed, and yet another puncture on return to the vehicle delayed driving to the North. In hindsight, probably Okulunu was in fact N of the W-E Ridge, so half-way down Bee Sting, the signals from Okulunu were occluded by this ridge.

After unsuccessful daytime attempts to pick up signals from the ridge, Tim and Paul again climbed Bee Sting at dusk on Nov. 5th. At 10:30pm, 3.5hours after sunset strong signals were again detected on the same NE bearing as previously. Climbing down the mountain, this time the signals remained detectable at ground level and the distance to the parked vehicle covered as fast as possible. They then had to drive carefully along the difficult tracks overgrown with thornbush which lead NE, checking periodically for signals from the vehicle's roof and at every high point. Unfortunately, at about 1:30am, 3 hours after first signals were detected, the signal disappeared S of the ridge. The W-E ridge in rhino country had to be climbed on foot to check there again, but to no avail. Perhaps Okulunu had by now finished its night's foraging and was back underground again - indicating the short time one has to get to a pangolin once its RF tag signal is detected. Although Bee Sting mountain has the best elevation for long-range signal detection, the ~10km distance to the pangolin's location was difficult to cover rapidly enough.
By now, nights were running out of before the end of Paul's field trip. On Nov. 6th the W-E ridge was scaled by Emiel, Paul and Tim at dusk, periodically checking for signals with the Yagi after nightfall from the top of a high fence post. Strong signals were detected to the N at 10:30pm. As there are no drivable tracks, these signals were followed N as fast as walking in acacia bush at night permits, keeping a sharp look out for nearby rhinos, warthogs, hyenas et. al. After about 3 km, the boundary of Mundulea was reached, but the signals after climbing fence posts could be followed into the property of a friendly neighbour who had previously given his permission and indeed support for our pangolin project.

At times the signal strength on this flat ground seemed to indicate that the trackers were close on the 'heels' of Okulunu. The GPS log shows that the pangolin seemed to be headed due N at the end. Possibly the animal had scent of, or heard the three trackers, so headed away in a straight line, rather than its more random foraging behaviour. Despite a fortuitously full moon, keeping up as fast as possible on foot with an armoured creature in its own habitat, by torchlight through vicious thorns can be difficult! Eventually at 2am, then ~3.5hrs and 5-6km after first detection and 6 hrs after starting out the previous evening, Tim declared that the signals seemed to be coming from every direction and a local hunt revealed 'Houdini' curled up protectively under a tree! 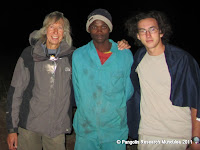 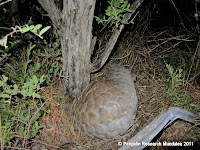 After noting the GPS coordinates to be able to return Okulunu to the same spot, he was put in a sack and carried back to the Mundulea entrance gate. The vehicle had been abandoned several hours earlier and several kms away, so three trackers and the pangolin waited as the golden moon set after calling to wake Graham. He arrived at 3:30am to give the party a lift back to the farmhouse through the now sleeping bush, under a sky filled with stars. Eventually, Okulunu was put in an outhouse ~8.5 hours after starting the chase. As Cape Pangolins can climb as well as tunnel, various objects were removed from shelves to minimize any damage whilst it was kept for the remainder of the night in captivity!
The story about attaching the GPS/GSM device to Okulunu and its re-release is continued -
click on ''Older Posts'' below to see the latest posts, or on this link.