As luck would have it, on October 30th just 3 weeks after Paul returned to the UK from his field trip, Tim was out walking when he spotted a large pangolin looking at him! Despite cutting his fingers on its sharp scales, he managed to capture it. The large pangolin was a male and in very good condition, weighing 8.6kg. 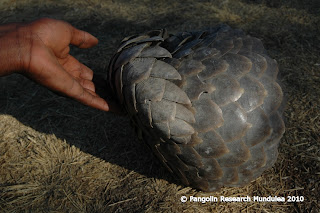 Unfortunately there were some initial problems with the long-battery life RF tags, so we couldn't immediately tag and re-release the pangolin. We tried to keep the pangolin for a while inside a workshop on the Reserve, even taking it for 'walks' to feed in ant and termite country. However, as mentioned on Wikipedia, these animals are well known 'escape artists' - it soon managed to tunnel through the thin concrete floor into the basement - see the photos below! Anyone considering keeping a pangolin in captivity should realize there are big problems in their enclosure and husbandry.

Because of the great difficulties of adequately feeding a pangolin in captivity, the pangolin had to be released before new corrected tags arrived by courier in Namibia to attach to the animal. We want to get some experience in building ant traps for their preferred prey, as has been successfully done for Asian pangolins, before trying again. 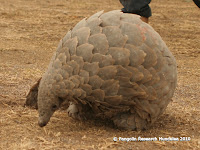 (Photos in this blog post are courtesy of  Graham Higgs
So Tim's pangolin trundled off into the sunset in good condition. We hope to encounter it again one day in Mundulea: it should be recognizable by the wear patterns of its scales. 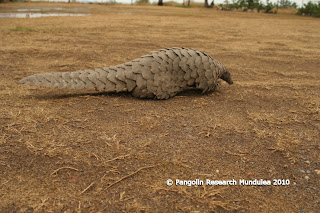