Tracking the pangolin 'Kasupi' after release

A radio signal from Kasupi's tag was picked up again a few days after the pangolin's release and tracked for a week by Debbie Shaw and Tim Andreas. This tag has a posture switch which sets the RF emision rate to either 45 or 60 pulses per minute, depending on whether the tag is tilted to one side or the other, so helping to distinguish the animal's movement versus resting. The pangolin was found to progressively head 1-2 km a day into a good ant-feeding area which had we surveyed in detail last year as a sandy zone showing many traces of pangolin foraging activity. There, with a good food supply, it seemed to take up residence.

The tag worked well, its RF transmissions being picked up on a receiver more than 2km away. The higher that the Yagi operator can get, the better the chance of detection. As demonstrated in the photos below, Tim was therefore keen to get to a better elevation with the aerial! 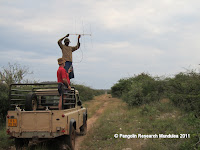 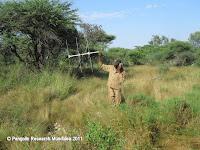 (Photos in this blog post are courtesy of  Debbie Shaw and Graham Higgs. Note: Click on any image in the blog to enlarge it) 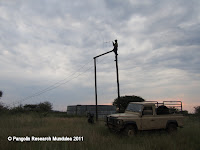 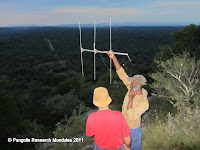 Even when the pangolin was down a large deep aardvark burrow, the RF signals were still detectable, though despite trying hard the animal might still not be spotted inside with a light! 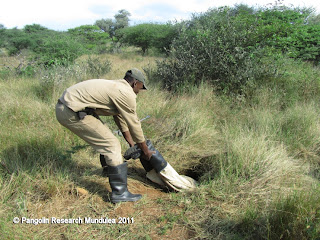 Given the daily downpours in April 2011, plus the heavy resulting growth of vegetation cover(see below) , visual sightings of the pangolin without the RF tag would have been impossible. 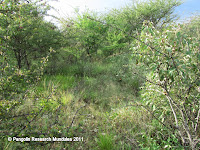 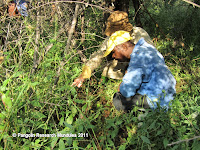 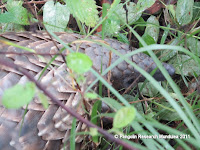 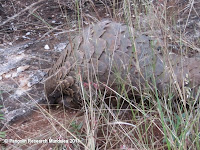