Using a Yagi directional antenna on a radio receiver tuned to the frequency of a small RF transmitter attached to an animal or bird is a standard approach for tracking wildlife. However, the method still requires some practice to locate the transmitter at the limits of its range. Paul became familiar with the equipment, using the 3 lower-power PIP tags purchased from Biotrack which have an extra ground plane antenna to increase their range. Some range experiments were done, with the RF tags at ground level on a rock, successively walking increasing distances on the flat from them with the Yagi and receiver, but also each time climbing the hilly outcrop in the centre of the South part of Mundulea (see view from the hill below): good exercise! 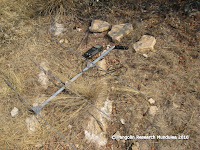 The detectable range obtained of about 400m on the flat was disappointing, given that pangolins can amble further distances in a day (or night!). Of course, slight rises in the terrain, rocks or stones will block the RF signals near ground level. More useful detection ranges of up to about 2km were found to obtainable from the hillside and top. (Subsequently, we have had longer-battery life, increased range TW-3 tags made by Biotrack for our pangolin application) Like other RF communication methods, a pangolin would have to be above ground, out of its usual daytime burrow to be detected this way.

The custom electronics tracking 'combos' which Juergen has specially developed allow one to interrogate the unit's GPS location over a cellular GSM network, getting the coordinates back via an SMS message (That is, if the unit is above ground, GPS signals have been acquired and the GSM network has been found). Two Namibian mobile network providers, MTC and LEO, reach Mundulea. However, their coverage of the Reserve is unfortunately patchy. Areas with better mobile reception were therefore investigated. The functioning of 3 combos tested out well with both MTC and LEO SIM cards inserted, having turned off the SIM cards' locking codes. 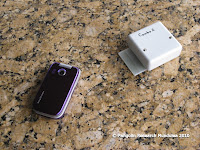