On the 24th July 2012, Liz Komen at Narrec obtained custody of a rescued male pangolin, later named ‘Otto’. The animal weighed 7.1kg and had many chipped scales, such as are frequently seen when traditional healers have used pliers to chip off pieces for concoctions.  However, despite being highly stressed from its treatment and wanting to escape from human presence, even freezing at the sound of a voice, the animal was powerful and in good condition. All its limbs were excellent, it was walking carrying its tail off the ground, rolling very strongly and not suffering from eye or nasal discharges.

We are realizing how crucial it is to re-hydrate rescued pangolins, though that is not always simple. On Otto’s first evening foraging walk at Narrec the pangolin completely ignored a water bowl 30cm away, but went instead straight to the nearest open water about 40 metres away, drinking there until disturbed by a movement. Otto did not seem to be interested in a pangolin food mix that has been used with some success in Zimbabwe. That night the pangolin made attempts to escape by pushing and digging at the wire mesh enclosure. Therefore, with his weight up the next day to 8.1kg he was rapidly transferred to Mundulea in a carrying box, for RF tagging and release on the afternoon of July 26th.

On arrival, Otto again drank some water and was fitted with an RF tag so we could track it. As it seemed very stressed by humans, it was released as quickly as possible without further measurements, or even checking on its sex (later found to be a male). The sequence below of photos taken by Bruno Nebe shows the process of attaching a radio tag.

The first night it was tracked to a hole about 1km from the release location, then its GPS locations ascertained daily without further interference to allow the animal to settle – subsequently it was a bit more relaxed in human encounters, though still very feisty. 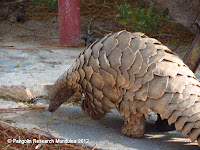 A few weeks after release in Mundulea, the pangolin was recaptured and weighed, being just over 8.2kg, but still searched out a pool of water from a tap and drank vigorously (see photo below and video of it drinking by Graham Higgs). Note that by Sept. 22nd, about 2 months after release Otto's weight had increased by more than 2kg to 10.5kg.