May 2013: Pilot Survey of pangolin awareness in Namibia

During the early part of 2013, our project was pleased to welcome the participation of Michael Drake, a US Fulbrite Fellow. Michael organised a pilot survey of the local attitudes and awareness of pangolins in Namibia. Pangolins are a natural living 'treasure' in Namibia, yet are under threat from the rapid population growth in Namibia since Independence, deforestation and loss of habitat, agricultural changes and especially poaching: both for African traditonal medicine, but also now increasingly the illegal trade to the traditional medicine markets in China and Vietnam.

Michael presented his pilot results to the African Pangolin Working Group in South Africa in May 2013. A summary of his survey was also presented by Paul Rankin at the International IUCN Conference on pangolins in Singapore, June 2013. While the details of the survey and methodology are available from Michael, the Singapore summary slides are included below: 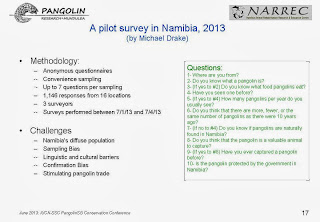 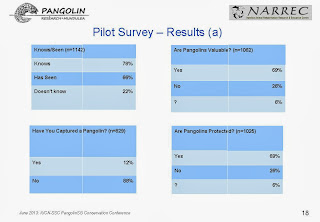 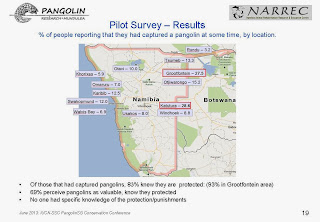 •The pilot survey indicated that 69% of all correspondants perceive pangolins as valuable, but know they protected. Of those correspondants who had captured pangolins, 83% knew they are protected (93% in Grootfontein area). Disappointingly, no one had specific knowledge of the protection/punishments for pangolin possession or trade. A conservation/educational programme seems indicated in Namibia.

Michael also spent time with Tim on Mundulea searching for the RF signals of our several tagged pangolins, which yet again were difficult to find! He tracked one rescued pangolin, 'Victor' released in Mundulea on Mar. 30th until its demise on May 7th 2013, see previous post on Victor. Sadly Michael had also found the mortal remains of Okulunu, our long-standing resident pangolin on 26th Feb 2013, see the previous blog post on Okulunu.