Pangolin Research Mundulea participated in the first ever global conference on the conservation of pangolins, June 24th-27th June 2013 in Singapore. This conference was organized by the IUCN-SSC Pangolin Specialist Group of which we are members, in conjunction with Wildlife Reserves Singapore and the Wildlife Reserves Singapore Conservation Fund. It was attended by over 40 IUCN-SSC Pangolin Specialist Group members as well as non-members from 14 countries, see http://www.pangolinsg.org/news/ The event saw presentations of recent research into understanding the demand for pangolin scales and meat, tracking, ecological monitoring and the latest developments in captive care and husbandry.  These were followed by workshops conducted on IUCN RedList endangered-status re-assessments and formulating a strategy for pangolin conservation in the next decade, including CITES Appendix upgrading. The conference successfully brainstormed and outlined several priority actions that need to happen to improve the status of the pangolins. These include conducting additional research and monitoring to determine pangolin numbers, directing funds to protect pangolin habitat strongholds and addressing the demand for pangolin meat and scales. While the event itself was a landmark in the conservation of pangolins, a multi-faceted approach is urgently needed to conserve pangolins given their rapidly declining populations worldwide.

Paul Rankin attended from our project and gave one presentation on 'Cape Pangolins in Namibia: rescues, tracking research and lessons learnt'. This included recent results from detailed GPS tracking of a released pangolin showing its homing behaviour and the dispersal behaviour of a rescued and released animal, but also gave a consensus Namibian perspective - after consultations with Liz Komen at Narrec and Bruno Nebe in our project. Paul's slide on the Namibian context and summary slide on lessons learnt are included below. 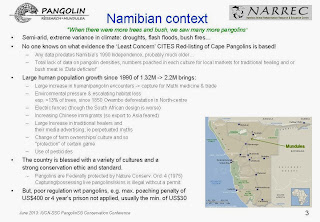 Paul also gave a second presentation on behalf of Dr. Debbie Shaw, ethnopharmacologist, expert in Traditional Chinese medicines (TCM) and member of our project team, entitled 'Pangolins and Chinese Medicine: uses, substitution and regulation'. This invaluable contribution identified substitutes for pangolin scales as used in TCM formulations which should be acceptable by the authorities and practitioners in TCM and so be one route to reducing the demand for these endangered species. The two full presentations are provisionally available on request via

** Click here for viewing subsequent posts in this blog for 2013 **