An overview GPS map using Garmin's MapSource software of all the pangolin feeding sites identified in the four sandy zones surveyed in Mundulea is shown below. The zones are outlined in grey, with some other landmarks added for reference. Each feeding site (or local cluster of several) is shown as a green star along the walked tracks. A few prominent aardvark warrens of the many encountered are marked with red triangles. The sites ranged from one day old to a few months old (i.e. after the previous rains). As expected statistically, most of the sites found were old, i.e. made more than a week previously. More detailed maps can be made, highlighting the recency information that was recorded. 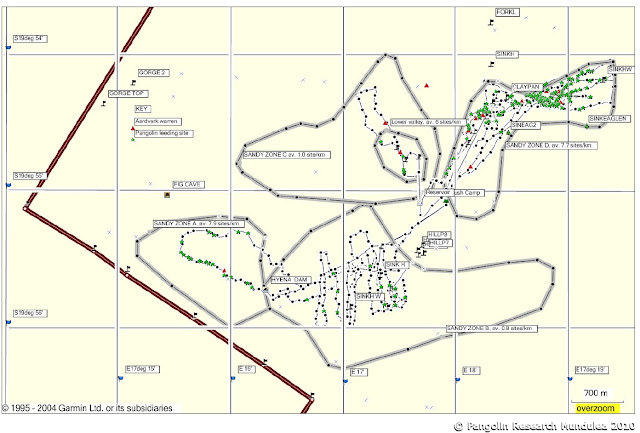 To get an idea of the relative pangolin activity in the different zones, averages of the number of feeding sites found per km walked were calculated. (Of course the longer the distance walked, the more likely statistically it is that feeding sites will be found). As pangolins tend to be solitary, we can speculate that the activity is due to about 3-4 individuals.

The maps help us start to understand the preferred pangolin areas and begin a correlation with geological and botanical information. In the long term we would like to relate pangolin activity in such semi-arid savannahs with that of its prey species, working with expert entomologists. Of course, the availability, activity and depth at which prey are to be found depend both on the Namibian season, the amount of recent rain and the particular species of ant and termites. Pangolins only forage the surface and do not dig deep for food. During the cold Namibian winter (~June-July), Cape Pangolins hibernate underground in burrows.