Paul met Prof. Ray Jansen on Sept. 13th in to discuss pangolin research and conservation priorities such as updating their CITES Red List status. Ray is lead in the African Pangolin WG (APWG) http://pangolin.org.za/  (see Sept 12th 2012 post above) and Head of the Department for Environmental, Water and Earth Sciences at the Tshwane University of Technology, . We hope for a formal affiliation with the PWG not only to foster research exchanges and contrasts between different pangolin environments but also to open sponsorship opportunities for our pilot work when the APWG has obtained a formal Non-Governmental status.

Subsequently, Paul was privileged to spend a few days with Darren Pietersen at the hospitality of his family in the 40x50km2 Kalahari Oryx game reserve, East of Upington, which is home to a wide variety of game, including white and black rhino. 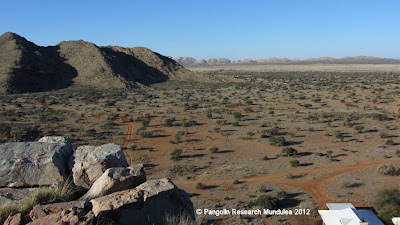 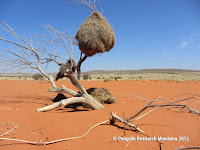 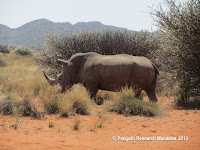 After 4 years of intensive research there, Darren has now become a key expert on various aspects of , their behaviours, prey and habitats. He also has experience with alternative GPS and digital RF tracking technologies, so the visit was invaluable. Darren has tracked some 15 pangolins (60% F; 40% M) over this period, seen signs of the trails left by mating and gestating animals and mapped out their home territories in the reserve. His methodical work has included weighing and measuring about 80 pangolins (incl. 35 dead specimens, 30 of which had been electrocuted, see below), systematic sampling with pitfall traps to identify the pangolin’s ant and termite prey species in different vegetation zones, gathering data for seasonal and temperature dependencies and measurements of pangolin’s core temperatures. Darren is now busy analyzing and writing up this unique corpus of data, so there was much to discuss. 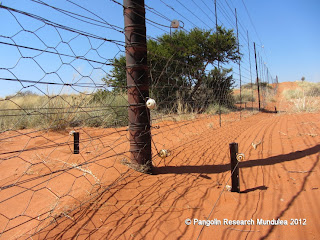 One of Darren’s concerns has been the mortality rate of pangolins which are electrocuted by the additional wires that run 20cm high about a meter away alongside game fences, as recommended in South Africa in 2009 because of jackals i.a. (see photo above). Tragically, he has found that 1 pangolin dies per year per 10km curled around these extra wires (The main electrified fence itself is not a problem because the pangolin’s side scales are insulating) A two-year controlled study is planned comparing alternative fence designs to improve game fencing.

The red sandy terrain of the Kalahari Oryx reserve is very different to the hard dolomite terrain of Mundulea, providing an interesting contrast in habitats and presumably the ’s behaviours and prey species. The challenges for pangolin tracking are also quite different. Radio transmission through the soft Kalahari sand means that Darren gets a similar Yagi detection range of 2-3km or more for a pangolin’s RF tag whether it is on the surface or underground in a den, unlike in Mundulea where the detection range may be <200m when the pangolin is in a burrow during the day.

Whilst pangolin spoor are rarely seen in the grass or rocky ground of Mundulea, their tracks can be often be followed over a distance across the Kalahari sand. Two photos below illustrate how the animal’s rounded footprints are actually slightly triangular and fall in a line behind each other. Twice Darren has even observed the heavier prints of a female mounted by a male entering a den, with separate tracks emerging later, presumably after mating. 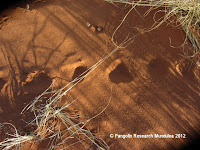 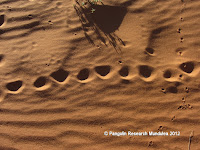 Paul’s first night in the Kalahari Oryx reserve proved exciting! Darren drove out to find a 9.5kg female pangolin, 'Shredder', the first he had RF-tagged and last still to have a tag at the end of his studies. Knowing its territory well, he quickly spotted fresh tracks and found her with the Yagi receiver 200m away. They observed the pangolin for half an hour, little concerned by human presence as she shuffled around foraging for ants. Nearby, Paul was also fortunate to see bat-eared foxes, spring hares, porcupines, a skunk and, for the first time, an Aardvark. 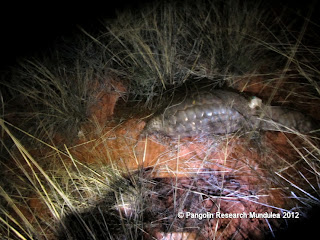 Returning in the darkness to the vehicle however, they nearly walked into a black rhino downwind objecting to the intrusion. Jumping inside a convenient but insubstantial acacia bush, hearts pounding they were understandably very quiet for sometime! Sparingly using torches, a long, careful detour then commenced via a mountain ridge, too rocky for an easy rhino charge. Paul waited for a long half hour, apprehensively imagining the beacon of his scent downwind with lion, rhino, leopard and buffalo around, whilst Darren traced his way back to get the vehicle. The black rhino encountered turned out to be pregnant and about to calve, so a subsequent return to see Shredder again was not advisable.

The following afternoon Darren and Paul went out looking for a pangolin near its 30 dens, which had been located in Darren’s study. This pangolin had been fitted with a prototype GPS + digital RF transmitter that had failed; annoyingly losing two month’s of precious GPS data. Without an RF signal, the pangolin was now very difficult to locate to remove the device. Pangolins’ territories in the Kalahari Oryx can be large. For example, one male pangolin’s home territory (with an almost congruent female's territory) had been mapped at 5x3 km. As a postscript on this invaluable visit, it was noted that once released without a tag, the elusive pangolin is rarely, if ever seen again. In four years of driving the Reserve every night, Darren had never encountered one on the road.
Posted by Bruno and Paul at 12:15