Pangolin faeces, or scats are rarely described in wildlife books and can be confused with those of other ant and termite eaters, such as honey badgers or aardvark. The pangolin has no teeth, but uses earth or sand in its stomach to grind food to aid digestion. Its scats are hard round balls, about 1.5cm in diameter, without any extrusive character.  A pangolin's digestion of ants and termites is very efficient - hardly any ant body parts are seen at all in the scat when it is broken open, as compared for example with that of the aardvark, which has a similar size, but is more formed and glitters with ant remains on being opened. 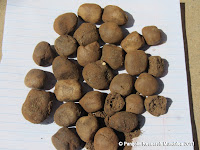 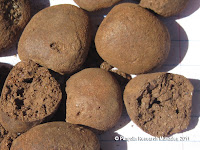 Cape Pangolin scats
(lines on the paper are
about 0.75cm apart) 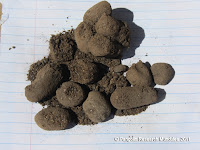 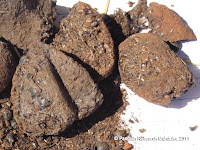 Aardvark scats
Posted by Bruno and Paul at 13:30