J. M. Swart, P. R. K. Richardson and J. W. H. Ferguson produced an exemplary study of the influence of ecological factors on the diet and foraging behaviour of 15 radio-tagged pangolins, using pitfall traps to collect ant and termite prey in the Sabi Sand Wildtuin area of South Africa. Emiel de Lange who joined our project in October and November 2011 followed their collection methods to start to identify the pangolin prey species in Mundulea.

Four sandy valley zones had previously been mapped out where a large pangolin activity had been identified (see previous post). Emiel buried plastic collection tubes containing water and a little soap solution (to prevent the ants climbing out) in the ground up to their rim to take ant and termite samples in each of these regions, near places where evidence of pangolin digging was present.  In addition, tubes were placed near the last known sites of dens of the pangolins Kasupi and Stievie and at other places where fresh pangolin foraging marks could be observed. The total of about a dozen pitfall traps were laid, individually marked with their GPS locations and photos taken of the surrounding vegetation. They were then left for 24 hours, so that all the ant/termite species active at different times of the day and night might fall into the traps. 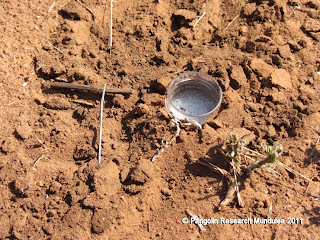 After collection, the ants and termite samples were preserved in alcohol and macro-photographed to aid identification. The collection has been split into two. Some preliminary ant identification has been done, e.g. of Camponotus maculatus (Spotted Sugar Ants) using M Picker, C Griffiths and A Weaving's 'Field Guide to Insects of South Africa' (2004, pub. by Struik Nature), but we need to elicit the help of expert entomologists for accurate species identification. 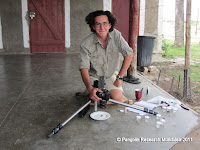 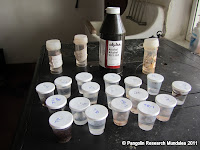 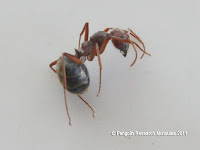 As well as using pitfall traps to collect pangolin prey, baiting was also tried. Jam and peanut butter was partially buried near a recent pangolin foraging site. A camera trap was set up in case the pangolin appeared, drawn by the ants. However, this did not capture any nocturnal or daytime visitors over 48 hours. Probably some weeks or more of baiting and habituation would be needed before a pangolin becomes a regular site visitor.
Posted by Bruno and Paul at 13:40