A directional Yagi antenna linked to a receiver tuned to the frequency of an animal's radio tag is commonly used for tracking (see previous post). However, the use of RF tracking for finding and following pangolins that have already been tagged faces several challenges and unknowns:

It's clear that the search for a lost pangolin becomes a probability-based game, like hunting a needle in a haystack! 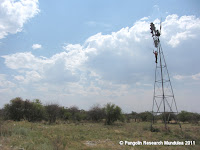 (photos by Emiel de Lange)
(Comments are invited here from any others experienced in pangolin tracking on the methods which they have found most efficacious.)
The following strategy, seen in hindsight after the October/November 2011 field work in Mundulea, may be effective: